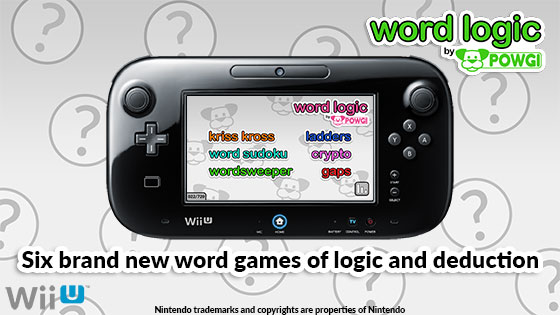 This compendium focuses on puzzles that are solved using logic and deduction.

The puzzles included are:

Kriss Kross
The classic word-fit puzzle. Place words into the grid using their length as a guide, and using logic to make sure everything overlaps correctly!

Ladders
Make new words by changing one letter at a time. Can you turn one word into another in a limited number of steps?

Crypto
A cipher puzzle (also known as a cryptogram) which reveals a quote when you crack the code!

Word Sudoku
Place nine letters according to usual sudoku rules. As an extra clue, one row or column will spell a word.

Gaps
Several words have one letter missing. Deduce the correct letter to fill in the gaps and spell a new word!

Wordsweeper
Drawing inspiration from Minesweeper, the clues tell you which letters can be placed in an adjacent square. Itâ€™s a crossword-style puzzle solved using logic!

Games developed and published by Lightwood Games under license.

Theme by Anders Noren — Up ↑